An ICP-MS Expedition through the Elements – Part 2. 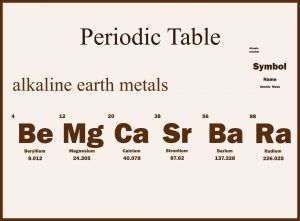 Our expedition continues with an exploration of the elements of Group 2 – the alkaline earth metals.

A short history of the alkaline earth metals1

The stable alkaline earth metals (Group 2 of the Periodic Table) consist of beryllium (Be), magnesium (Mg), calcium (Ca), strontium (Sr) and barium (Ba), with radioactive radium (Ra), which has no stable isotopes but does occur naturally as a result of radioactive decay of uranium and thorium isotopes, concluding the group.

The first member of the group to be identified as an element was magnesium, found by the Scottish physicist and chemist, Joseph Black, in 1755. Through heating experiments with the carbonate minerals magnesite and limestone, Black was able to distinguish magnesia (magnesium oxide, MgO) from lime (calcium oxide, CaO). The name magnesite originates from Magnesia, a district in the Greek region of Thessaly, where the mineral was first identified. The first impure quantity of magnesium metal was produced by the Austrian chemist Anton Ruprecht in 1792, through his work on heating magnesia with charcoal.  It was the prolific Cornish (UK) chemist Sir Humphry Davy (also renowned for his work on identifying the alkali metals, as discussed in my first blog post in this series) who first isolated pure magnesium through electrolysis of magnesium oxide in 1808. Davy originally named the element magnium, but over time this evolved into magnesium.

Barium was first identified by the German / Swedish Pomeranian chemist Carle Scheele in 1774. Through his studies of the mineral baryte, Scheele determined that it contained a hitherto unknown element, but he was unable to isolate it at the time.  Around the same time, English mineralogist William Withering found an unusually heavy mineral in the lead mines of Cumberland, which came to be known as witherite (barium carbonate). Following several years of study of these minerals by numerous other scientists, barium was finally isolated (and formally named) by Humphry Davy, through electrolysis of molten barium salts, in 1808. The name barium originates from the alchemical word ‘baryta’, from the Greek word for ‘heavy’, in reference to the heavy weight of minerals containing this element (as noted above).

Humankind has been aware of calcium compounds for thousands of years. Lime (generally composed of calcium oxide, calcium hydroxide or a mixture of the two) is known to have been used as a building material as far back as 7000 BC and indeed the very name calcium derives from the Latin word ‘calx’ meaning ‘lime.’  It was the French chemist (and, unfortunately for him, nobleman; he was sent to the guillotine in 1794, at the height of the French Revolution) Antoine Lavoisier who, in 1787, first suspected that lime might be an oxide of an unknown element.  Once again, it was Humphry Davy who first isolated calcium metal using electrolysis in 1808.

Strontium was jointly discovered by the Irish born chemist and physician, Adair Crawford, and the Scottish chemist William Cruickshank, in 1790.  From their work on the mineral strontianite (from which the name strontium is derived; strontianite itself is named after the village of Strontian, near which the mineral was first found in the area’s lead mines) Crawford and Cruickshank noted that it differed in composition to baryte, leading them to conclude that another substance was present.  The following year, the Scottish chemist and physician Thomas Charles Hope demonstrated from further work on strontianite that the unknown element within it provided a red colour in a candle flame.  Again, it was Davy who, in 1808, was the first to isolate elemental strontium by electrolysis of a mixture containing strontium chloride and mercuric oxide, and it was also him who ultimately gave this element its name.2

The last of the stable Group 2 elements, beryllium, was discovered by the French pharmacist and chemist, Louis-Nicholas Vauquelin, in 1798. Vauquelin reported that he had found a new ‘earth’ in the extracts he obtained while dissolving aluminium hydroxide out of emerald and beryl minerals. The term ‘earth’ historically refers to substances that were once thought to be elements, but later found to be metal oxides – this applies to both the Group 1 and 2 elements, and is the source of the word ‘earth’ in the name of Group 2). This new earth was christened ‘beryllina’ by the German chemist Martin Klaproth, (derived from the word ‘beryllos’, the Greek name for the mineral beryl). Elemental beryllium was first isolated independently by the German chemist, Friedrich Wöhler and the French chemist Antoine Bussy, by reacting potassium metal with beryllium chloride, and it was Wöhler who first coined the name beryllium, in 1828.3

The final member of the group, radium, was discovered by Marie and Pierre Curie in 1898. They found it in the form of radium chloride in the uranium-rich mineral uraninite (formerly known as pitchblende). While studying this mineral, the Curie’s first removed uranium from it and found that the remaining material was still radioactive. Further extraction and isolation of compounds resulted in a mixture composed mostly of two components; barium compounds, which provided their well-known green light emission when tested in a flame, and a group of unknown radioactive compounds which gave deep red spectral lines that had not been recorded before. The Curie’s found these compounds to be similar to the barium compounds, but less soluble, which enabled them to separate them. Elemental radium itself was first isolated by Marie Curie and André-Louis Debierne using electrolysis of radium chloride in 1911.  The name radium derives from the Latin word ‘radius’, meaning ‘ray.’

The Group 2 elements are not as easily ionised to singly charged ions as those of Group 1, but even the most poorly ionised member, beryllium, produces a considerable amount of ions per gram in the argon plasma of ICP-MS instruments.

Table 1 shows some key properties of these elements with regard to their analysis by ICP-MS.

Table 1.  Key properties for the Group 2 elements for ICP-MS analysis
(preferred isotope for analysis in bold). 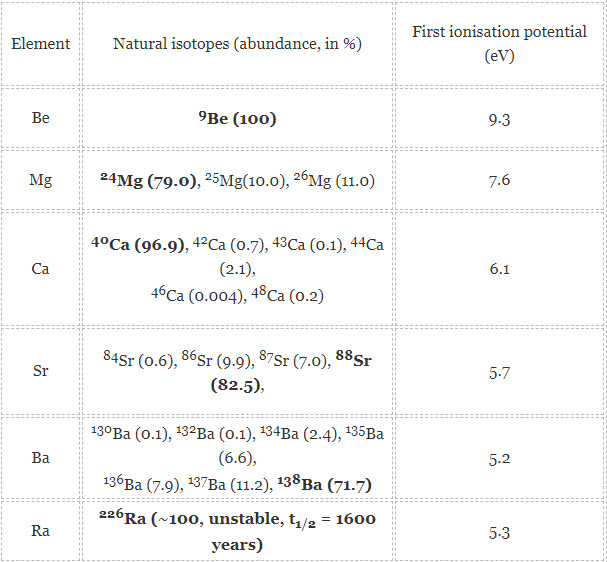 Interferences and other considerations for Group 2 element analysis by ICP-MS.As with the Group 1 alkali metals, the relative sensitivity (per g L-1) of the Group 2 elements varies because although 1 g of Be contains many more atoms than 1 g of radium, space charge repulsion in the ICP-MS interface region reduces the transmission of lighter ions compared to heavier ones.  This, coupled with the higher first ionisation potential of the Group 2 elements, results in the sensitivity (in counts per second per ng mL-1) for Be being much lower than the sensitivity for Ra.  Despite this, parts per trillion detection (ppt or μg L-1) limits can still easily be achieved for Be, mainly because, like its equally low mass neighbour Li, in almost all analyses Be isn’t affected by interferences.  In the next part of this blog, I’ll briefly discuss the interferences and other pitfalls encountered while measuring the Group 2 alkaline earth elements by ICP-MS.

As mentioned above, beryllium, mono-isotopic at mass 9, is not generally affected by interferences in ICP-MS so it can be measured without collision cell operation.  It can cause sample-to-sample washout memory effects, so in some applications you may need to increase the rinse time between samples or use mixed acid wash solutions (e.g. 2% (v/v) HNO3 plus 2% (v/v) HCl).

Magnesium is affected by 12C2+ interference (on all three Mg isotopes) when measured in organic solvents, but this interference is easily removed using either single or triple quadrupole instruments equipped in He KED collision cell mode.  Doubly charged 48Ti on 24Mg and 25Mg can be a problem if the Ti concentration is high, but this is also easily resolved on single, triple and high resolution ICP-MS instruments. Magnesium washes out well between samples so memory effects aren’t a concern.  It is quite a common element in the environment so, contamination can sometimes be an issue.  For low-level Mg determination, cleaning procedures (as described in this blog post) are required.  If sub-ppt detection limits are required, cool plasma operation is effective for Mg.

Calcium, like potassium, lies in the mass range of the biggest source of interference in ICP, namely argon.  Interference from 40Ar+ in the plasma is massive, so the most abundant 40Ca isotope can’t be measured in standard mode, He KED mode or using HR-ICP-MS.  Instead, the next most abundant isotope, 44Ca, is used.  This isotope is affected by 12C16O2+ interference and can also be affected by 88Sr2+.  The former interference is easily resolved with single quadrupole He KED operation or HR-ICP-MS, but the latter requires the use of triple quadrupole ICP-MS with oxygen as the collision/reaction cell gas.  Calcium at mass 40 can, however, be accessed if hydrogen is used as the collision cell gas, as this gas effectively removes 40Ar.  Like Mg, cool plasma operation can also be beneficial for low level Ca measurement.

Strontium is usually quantified via the 88Sr isotope, which is generally not interfered.  As mentioned in the first blog of this series, for strontium isotope ratio work use of triple quadrupole ICP-MS with oxygen cell gas is recommended to avoid isobaric overlap between 87Sr and 87Rb.

Barium is easily quantified, almost invariably interference-free, via its most abundant isotope, 138Ba.

Finally, radium is usually not measured outside of nuclear chemistry laboratories as its various isotopes emit combinations of alpha/beta particles and gamma rays.  It is naturally present, as the 226Ra isotope, at extremely low levels in certain environmental samples and can be measured free from conventional (i.e. non-radiogenic) interferences at this mass on any ICP-MS system.

With that, our second expedition through the elements draws to a close.  Join me on my next trip on which we will begin delving into the transition group elements that inhabit Groups 3 to 12 of the Periodic Table.

Take a look at our trace elemental analysis instrumentation page to explore our range of AA, ICP-OES, and ICP-MS instruments.

Visit our Food and Beverage, Pharmaceutical and Environmental pages to learn about our trace elemental solutions for the applications that are relevant to you.