Arsenic or Not Arsenic? Getting the Right Results from Your Quadrupole ICP-MS 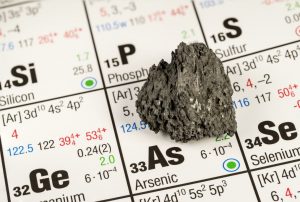 Arsenic is an element with a well-established reputation for being decidedly unpleasant. Its use as a poison is documented as far back as the first Century, when Dioscorides, a Greek physician in the court of the Roman Emperor Nero, described it in his writings. When mixed with food or drink, arsenic is colourless, odourless and tasteless, so its hapless victims have no way of detecting it. In the Middle Ages, the most notorious of families, the Borgias, widely used arsenic to dispatch various bishops, cardinals and other high-ranking officials.

Arsenic is at its most poisonous when present as an inorganic compound, such as arsenic trioxide. Organoarsenic species such as arsenobetaine are generally far less toxic. If you’ve ever eaten flatfish, such as plaice, you’re likely to have ingested a fair amount of arsenobetaine, but if you’re reading this, have lived to tell the tale.

If the Borgias conducted their sinister activities today, they’d be far less successful at ridding themselves of troublesome clerics, as arsenic is easy to detect using elemental analysis techniques such as graphite furnace atomic absorption spectrometry (GF-AAS), inductively coupled plasma optical emission spectrometry (ICP-OES) and inductively coupled plasma mass spectrometry (ICP-MS).  In the absence of persistent poisoners, arsenic is generally present in food, beverage and environmental samples at levels in the sub-microgram per millilitre (μg/mL) range, and when these samples are digested and/or diluted in preparation for analysis, the arsenic concentration at the point of measurement is in the nanogram per millilitre (ng/mL) region. At this concentration, only ICP-MS technology or ICP-OES with hydride generation can detect and quantify arsenic. Hydride generation is more complex in that it requires extra reagents and sample preparation steps, so ICP-MS is preferentially used. Although it has the sensitivity required for measuring arsenic at the levels required, there are some interferences and other factors that need to be accounted for in order to get accurate results. In this blog post, I’ll cover the pitfalls you need to watch out for when analysing this element using ICP-MS.

Arsenic is a monoisotopic element with a nominal mass of 75 atomic mass units and a fairly high ionisation potential of 9.8 eV, resulting in it being about 52% ionised to 75As+ in an argon ICP. The fact that it’s monoisotopic presents a problem when it comes to spectral interferences as this means that there is no option to choose an alternative, non-interfered (or at least less interfered) isotope to measure. In ICP-MS, arsenic suffers from several spectral interferences, the most significant of which are 40Ar35Cl+, 40Ca35Cl+, 150Nd2+, 150Sm2+, 40Ca16O(1H316O)+ and 59Co16O+. In applications where high levels of Ni and Fe are present in the samples, interference from 58Fe16O1H+ and 58Ni16O1H+ polyatomic species is also encountered.

While ArCl+, CaCl+ and CaO(H3O+) can be effectively removed using single quadrupole (SQ) ICP-MS with collision cell operation and kinetic energy discrimination (KED), Nd2+ and Sm2+ cannot. In fact, due to the higher kinetic energy of these doubly charged ions compared to singly charged As+, interference from them is actually comparatively worse in SQ KED mode than it is in standard, no cell gas mode. Interference from CoO, FeOH and NiOH can be removed using SQ KED operation when the Co, Fe and Ni concentrations are low, but when they are high, SQ KED is not sufficiently effective. For quadrupole based ICP-MS systems, to completely remove these interferences, triple quadrupole ICP-MS is required.

Triple quadrupole ICP-MS works by using a quadrupole (Q1) to pre-filter the ion beam from the plasma to selectively transmit either a limited range of masses (which provides high sensitivity and efficient interference removal for the majority of applications) or a single mass (which provides high selectivity when the application requires it) prior to the beam entering the collision cell (Q2). The cell is then used to either remove the interference on the mass of interest or react the target mass to form a higher mass product ion, using a reactive gas such as oxygen. With the first approach, the unreacted target mass passes on to the analyser quadrupole (Q3) to be detected at its original mass. This is known as ‘on-mass’ analysis. With the second approach, known as ‘mass shift’ analysis, the product ion derived from reaction of the target mass with the cell gas passes on to Q3 to be detected at the product ion mass. In the case of arsenic, the mass shift approach is extremely effective since As reacts efficiently with oxygen in the cell to produce the AsO+ product ion, while doubly charged ions form products at different masses to AsO+ and the Co, Fe and Ni matrix ion oxides / hydroxides don’t react further to generate, for example, CoO2+ interference on AsO+. Conveniently, mass shift triple quadrupole operation also removes ArCl+, CaCl+ and CaO(H3O)+ too. Arsenic can then be detected (as AsO+) both interference free and with more sensitivity than in SQ KED mode. Mass shift operation for As analysis is shown schematically below (Figure 1).

This blog post has focussed on quadrupole based ICP-MS systems, but if you have access to it, high resolution, magnetic sector ICP-MS, such as the Thermo Scientific™ Element™ Series instruments (the Element 2™ and Element XR™) provides excellent accuracy for As analysis.  If you’d like to learn more about high resolution ICP-MS and how it works take a look here.

Like selenium, but slightly less dramatically so, arsenic is known to exhibit significantly enhanced sensitivity when carbon is present in samples, leading to a positive bias in the results if the calibration solutions don’t also contain carbon. The exact mechanism of this enhancement is not well understood, but since it is also observed (to a lesser extent) with emission from As atoms in ICP-OES as well as with As ions in ICP-MS, it is possible that the presence of carbon in the plasma disrupts As-O bonds in the arsenic species, thereby freeing As atoms to absorb energy from the plasma and emit more light or generate more ions as a result. As arsenic is generally present in samples as either inorganic species such as arsenite (AsO2–) and arsenate (AsO3–) or organic species such as methyl arsonic acid (CH3AsO(OH)2), it is associated with As-O bonds in the majority of cases, so signal enhancement in the presence of carbon is frequently observed. The simplest way to solve this problem is to match the carbon content of all blanks, calibration solutions and samples. This is most easily done by adding methanol, ethanol or propanol to a final concentration of 1 to 2% (v/v) to all the solutions to be analysed. This allows you to benefit from the higher As sensitivity as well as solve the enhancement problem. The signal enhancement effective observed on As (and Se) compared to some other elements, resulting from the presence of carbon is illustrated in Figure 2. In this example, samples containing 20 ppb of the elements shown with 2% (v/v) methanol added were analysed against a set of calibration solutions containing no methanol. Most elements are largely unaffected by the presence of methanol but in this test the As signal was enhanced by 55% and Se by 90%. 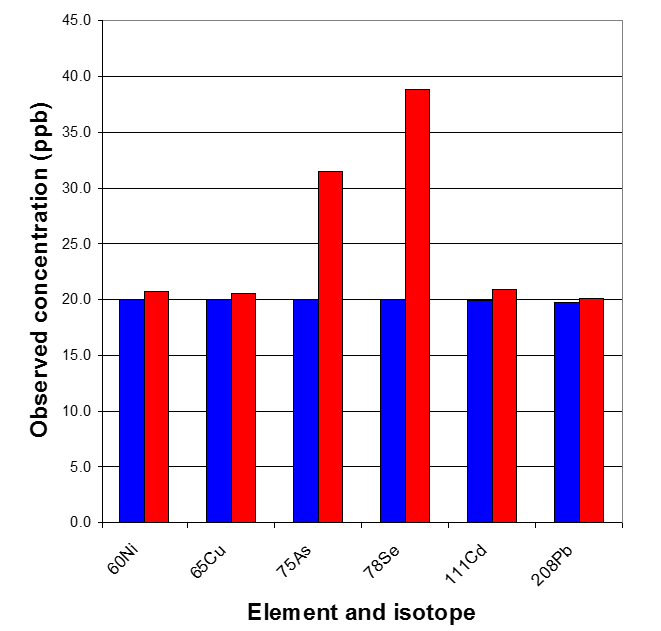 If you’d like to see how our triple quadrupole instrument, the Thermo Scientific™ iCAP™ TQ ICP-MS improves As (and other elements such as P, S, Se and platinum group elements) measurement in practice, you can download our iCAP TQ ICP-MS Applications Compendium.

To discover more about the complete Thermo Scientific™ ICP-MS instrument portfolio, take a look here. If you have any questions about the measurement of Se (or any other element) using ICP-MS or if you’d like to learn more about how Thermo Scientific’s ICP-MS instruments can help meet your needs for trace element analysis, just let us know via the comments box below!

Visit our trace elemental Food and Beverage, Pharmaceutical and Environmental pages to learn about the solutions provided by our instruments for your applications.

August 17, 2020 at 9:28 am
Hi there, we have the ICPMS element 2 using argon gas. I am wondering whether we can use element 2 to measure arsenic? Can you please provide more information or papers that I can check? Thanks!

November 7, 2020 at 4:10 am
Please provide me the application notes on As ANALYSIS IN WATER including speciation technique - best instrument to use . Which technique is superior - IC-ICPMS OR LC-ICPMS?

January 19, 2021 at 11:57 am
Hi Ajay, I’ll send you some relevant application notes. With regard to which technique is better, IC-ICP-MS offers benefits over LC-ICP-MS in terms of sensitivity, chromatographic peak stability, detection limits and routine analysis robustness. However, LC-ICP-MS is regularly used for speciation analysis and does provide sufficient performance for As speciation in particular. For low level Cr speciation, IC-ICP-MS offers lower backgrounds and better detection limits as a result of the fully inert IC sample path compared to HPLC systems.