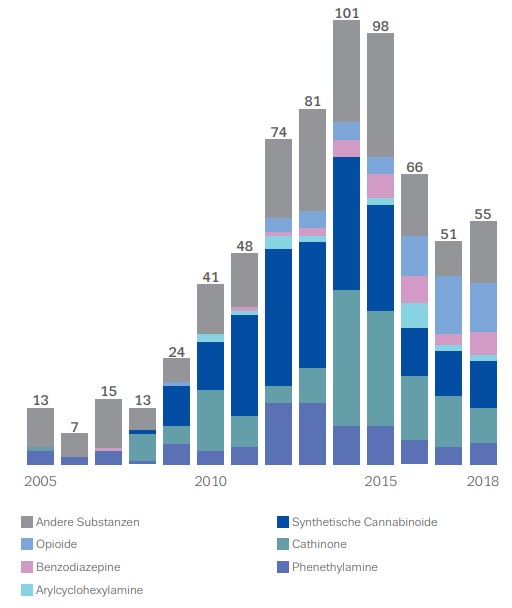 Number and categories of new psychoactive substances reported to the EU Early Warning System for the first time, 2005-2018. https://www.emcdda.europa.eu/system/files/publications/11364/20191724_TDAT19001DEN_PDF.pdf

New psychoactive substances (NPS) have become a big challenge in recent years. The change in the European drug market started in 2008 with NPS and an herb mixture called SPICE. The manufacturers claimed that the mixture contained only harmless spices. However, consumers experienced a kick similar to one like with Cannabis. In December of 2008 the substance was identified as JWH-018. This has a four-times higher effect compared to delta 9-THC. At this point, it was not regulated under the law as a drug, so it could be sold legally.

From 2008 to 2018 652 NPS were identified through the European Monitoring Centre for Drugs and Drug Addiction (EMCDDA).

Changes with the Pandemic

That was, of course, before COVID-19 hit the world.

Restaurants, bars and discotheques closed and curfews went into place. This led to reduced consumption of MDMA (3,4-methylenedioxy-N-methylamphetamine) and cocaine. This has been proven through wastewater analysis in Spain and the Netherlands. The amount of MDMA consumed during the lockdown went down in Amsterdam by 50%. In Castellon, Spain, the use of benzoylecgonine went down by 25%. Cannabis consumption stayed the same.

The availability of certain drugs decreased suddenly. This led to a digital market for drugs — the darknet. In the first three months of 2020, the amount of Cannabis products sold increased by 27% through the darknet. Consumers were buying up the stock of products, leading to low availability and increases in price.  A lot of people consumed more drugs simply because they got bored during the pandemic.

The closing of borders in the EU negatively impacted the transportation of drugs.  Cannabis resin for the EU market is produced mainly in Morocco. From March until May, there was no ship traffic between Morocco and Spain the borders between Spain and France also were closed. Stricter controls led to the finding of more Cannabis resin at the borders. In the harbor of Brussels, 11.5 tons of Cannabis resin —  hidden in a cargo of potatoes — was confiscated in 2020. The availability of Cannabis hemp remained stable in the EU; transport was not stopped by the closing of the borders. Dutch police had ascertained that the quality was not great, since there was a shortage of fertilizer available for the plants. All of these circumstances led to NPS and, as a result, the need to use new analytical methods to determine those new substances.

Local delivery problems of Cannabis hemp led to a stretching/addition of Cannabidiol (CBD) with synthetic Cannabinoids. From January through December 2020, 83 herbs were bought as marijuana that could be identified through drug analysis in Zürich as synthetic Cannabinoids. Two of the substances found were MDMB-4en-PINACA and 4F-MDMB-BICA, which were responsible for at least 25 deaths in Europe in 2020.

Another change could be seen for party drugs, which can easily be ordered online and delivered to your home. There is a big ”black market” for these. However, those using these drugs are not getting only the active agent but a lot of additions that are made for various reasons.

High-risk opioid users typically misuse benzodiazepines to self-medicate or increase the effects of opioids (Vogel et al., 2013); reasons that may overlap. Over the last decade, the EU Early Warning System on new psychoactive substances has detected an increased number of new benzodiazepines that have appeared on Europe’s drug market with more than half having been detected since 2015. The first of these were phenazepam in 2007 and etizolam in 2011. Four of these drugs — etizolam, diclazepam, flubromazolam and phenazepam — account for more than 80% of all tablets containing new benzodiazepines that have been seized in Europe since 2005.

Timeline of the reporting of new benzodiazepines to the EMCDDA. https://www.emcdda.europa.eu/system/files/publications/2733/Misuse%20of%20benzos_POD2015.pdf

Using isotopes for the identification of unknown substances.

Taking the structure of Etizolam as an example, how easy is it for a chemist to exchange the Cl in the molecule? Very easy, let me tell you. And now suddenly, it is no longer regulated under the law. It is also not in a library, so what can you do to identify it?

The challenges faced are the number of new drugs, the ways into the EU (country and source of origin) and nominal changes to the structure of an analyte. Replace a chlorine with a bromine or a fluorine.

So how can you identify those new drugs? Not everybody is capable of fragmentation rules in MS.

This is where GC High-Resolution-MS (HRMS) Orbitrap technology comes in. This technology allows you to identify the exact mass of the analyte with a mass accuracy of <1 ppm. What is the advantage of this technology and what benefit does it bring to your lab? All of a sudden you can use S/W tools such as Freestyle and/or Compound Discoverer that allow you to identify general unknown substances. Using the exact mass makes your analysis much more precise and sensitive. Where you get hundreds of peaks with nominal mass resolution, changing to the exact mass allows you easy identification. You can, of course, generate your own libraries. 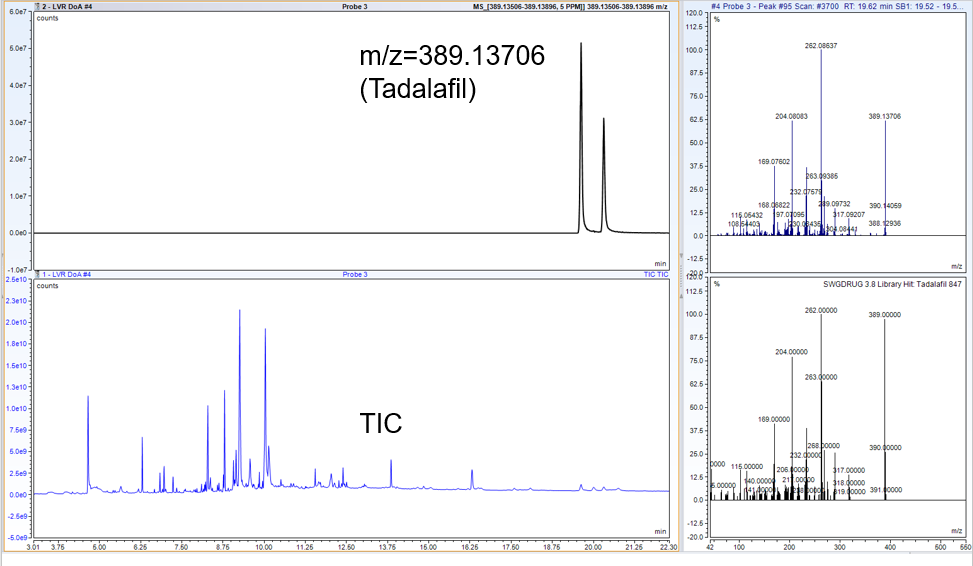 Below you can see an example with the correct calculation of the sum formula of Etizolam from the M+–signal with a deviation from the theoretical mass <1ppm. All isotopes were found and taken under consideration. 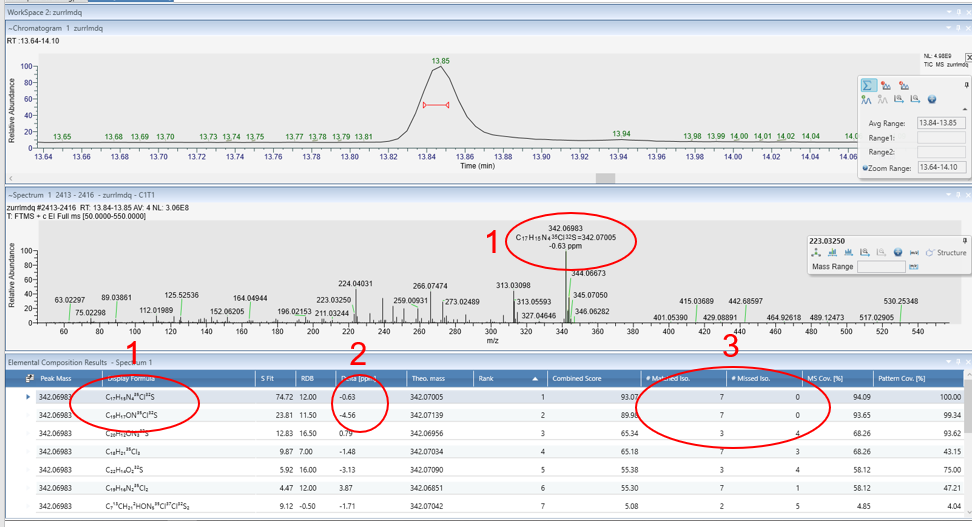 Using isotopes for the identification of unknown substances.

So even if you have completely unknown substances in this daily-changing environment, with Orbitrap technology, you have the tools to identify your drugs, whether in powders, pills or in biological matrices such as urine. Deconvolution algorithms will help you even in a complex matrix. 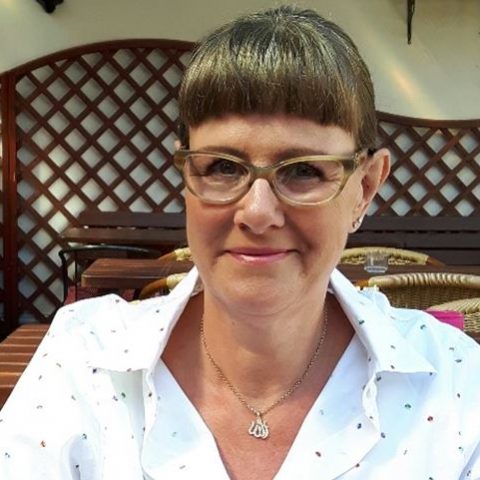