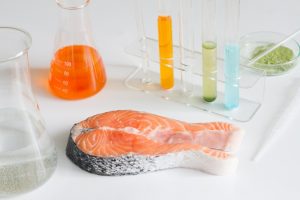 No doubt many of us are aware of the potential for pesticide residues or veterinary medicines in our food, but how many people are aware of potential contamination by chlorinated paraffins?  What are they, where do they come from, are they toxic to humans, are their levels regulated, and how are they analysed?  Many of these questions were answered when I watched a recent  webinar titled “Orbitrap GC-MS: An Opportunity to Help Address the Challenges of Chlorinated Paraffins Analysis,” presented by Kerstin Krätschmer, Institute of Food Chemistry, University of Hohenheim  and the European Union Reference Laboratory (EU-RL) for Dioxins and PCBs in Feed and Food in Freiburg, Germany  and Cristian Cojocariu, principal mass spectrometry application specialist, Thermo Fisher Scientific.

What are chlorinated paraffins?

Chlorinated paraffins (CPs) are a complex group of manmade compounds, primarily used in coolant lubricants liquids for metal workings. CPs are also used as secondary plasticizers and flame retardants in plastics, rubber, paints, adhesives, and sealants. Manufactured continuously since the 1930s, the production volume is estimated to exceed one million tonnes per annum.

From a chemistry perspective, they are complex mixtures of polychlorinated n-alkanes within a wide range of carbon chain lengths and degrees of chlorination. The chlorination degree of CPs can vary between 30 and 70%. CPs are subdivided according to their carbon chain length into short-chain CPs (SCCPs, C10–13), medium-chain CPs (MCCPs, C14–17) and long-chain CPs (LCCPs, C>17). The possibility of thousands of congeners and homologues makes the analysis very challenging, and never more important, because of the ever increasing concern for the high-production volumes, persistence, bioaccumulation potential, and toxicity of chlorinated paraffin (CP) mixtures, especially short-chain CPs (SCCPs).

SCCPs are persistent and bio-accumulative and classified as toxic to some aquatic species, and potentially carcinogenic to rodents in laboratory studies. They are also subject to long range distribution to remote places; SCCPs have been measured in arctic biota at concentrations similar to other known POPs. An updated draft risk profile by the working group on short-chained chlorinated paraffins under the POPs Review Committee of the Stockholm Convention in October 2015 concluded:

In the EU, the manufacturing, marketing and use of certain substances are regulated by REACH (Regulation EC 1907/2006). SCCPs were regulated by REACH until their classification as POPs under Regulation EC 850/2004 in 2012 was last amended concerning SCCPs by Regulation EU 2015/2030. Outside specific exemptions, only the production, placing on the market and use of articles with less than 1500 mg/kg SCCPs is allowed. Additionally, the Water Framework Directive 2000/60/EC as amended by Directive 2008/105/EC include SCCPs with a maximum admissible level of 0.4 µg/L.

In 2014 the U.S. EPA issued a Significant New Use Rule (SNUR) under the Toxic Substances Control Act (TSCA) for SCCP (C 12-13): a notification that allows the EPA to evaluate the intended uses and, if necessary, to prohibit or limit that activity. The EPA is further evaluating MCCPs and LCCPs as part of its Work Plan for Chemical Assessments. These chemicals appear to present similar concerns, although data on them is far more limited than for SCCPs.

Because of their persistence and believed harmful effects, SCCPs have been listed in Annex A of the Stockholm Convention POPs list during the COP.8 meeting in April/May 2017. Apart from specific exemptions the result, in effect, equates to a near worldwide ban on production and use .

How are CPs analysed?

Currently there is no consensus on an analytical procedure for the analysis of SCCPs or medium-chain chlorinated paraffin’s (MCCPs) in food or feed samples. For this reason, European Union Reference Laboratory (EU-RL) for Dioxins and PCBs in Feed and Food in Freiburg is trying to develop a harmonised approach for use in EU official control laboratories, but it is a challenging objective.

Margot Reth and Michael Oehme outlined the challenges of the analysis of chlorinated paraffins in a publication titled, Limitations of low resolution mass spectrometry in the electron capture negative ionization mode for the analysis of complex mixtures of short- and medium-chain chlorinated paraffins. Mass overlap by CPs of the same nominal mass can caused issues with the accuracy of quantification.

The complexity of the chromatograms and low-target levels of chlorinated paraffins in food and feed requires analytical techniques that provide extremely high selectivity and sensitivity without compromising one or the other.

In a comprehensive review article titled, Recent developments in capabilities for analysing chlorinated paraffins in environmental matrices: A review, van Mourik et al stated that knowledge gaps on the levels and fate were due to the difficulties that arise with CP analysis. In particular, the chromatographic separation within CPs, between CPs and other compounds, and the fact that only semi-quantitative analysis was possible. On a positive note it was expected that developments in high resolution TOF-MS and Orbitrap technologies would further improve the detection group separation and quantification of CPs.

During the webinar titled, titled “Orbitrap GC-MS: An Opportunity to Help Address the Challenges of Chlorinated Paraffins Analysis,”  it was shown that using the Thermo Scientific™ Q Exactive™ GC Orbitrap™ GC-MS/MS  system represents a significant advancement in the analysis of SCCPs as well as providing an opportunity for the analysis of MCCPs and LCCPs.

Both, electron ionisation (EI) and negative chemical ionisation (NCI), short GC columns and splitless injection were evaluated, together with different resolving powers and full scan data acquisition, for the analysis of SCCPs in technical mixtures and in salmon samples from different origins.

EI allowed low levels of total SCCPs to be detected and quantified but because of the highly fragmented spectra it was not possible to distinguish between homologues, and not easily between SCCPs and MCCPs. NCI at 60 K resolving power proved to be the best option because it could distinguish between those homologue groups, and even between homologues. Also, excellent compound linearity (25 ppb -10 ppm) was obtained for the C10 chlorinated homologues present in a SCCP 63% technical mixture, and excellent peak area repeatability with less than 5% RSD at 25 ppb. The analysis of salmon from the Nordic regions showed that C10H13Cl9 was found as predominant homologue while the levels of C10H14Cl8 and C14H23Cl7 were substantially different between salmon from Norway compared to Scotland. In addition, other chlorinated POPs could also be measured simultaneously.

The presenters concluded that taken together, the results demonstrate that the Q Exactive GC system is an excellent quantification analytical platform that delivers excellent sensitivity, linearity and selectivity using an uncomplicated instrumental setup. To find out more information on the technical details the webinar is available on-demand.