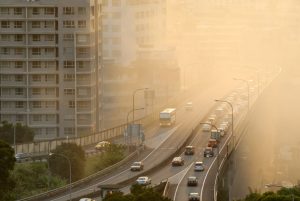 The global media frequently reports pervasive air, land and water pollution events and their associated risks for human and environmental health. Governments and institutions are focused on improved ways to measure the levels and origin of pollution while the general public is becoming increasingly aware of preventive actions to limit the negative effect of pollution on the environment.

To implement preventive measures and limit the damage caused by pollution, it is critical to determine the origin of pollution in the environment. The question is therefore, where did the pollution in the air, water and land come from?

In environmental investigations that seek to understand where pollution comes from, isotope fingerprints can provide a unique insight into the origin or production of a sample material, providing a strong supportive tool for investigators. This, therefore, implies the capability to determine the origin of pollution and understand the complex biogeochemical cycles in our air, water and land systems.

The Isotope Fingerprints of Pollutants

Pollutants do have these fingerprints — unique chemical signatures that allow them to be identified and told apart from one another. The ratio of stable isotopes—namely, carbon, oxygen, hydrogen, nitrogen, and sulfur—within a polluting material is dubbed its “Isotope Fingerprint.” To visualize this fingerprint, Isotope Ratio Mass Spectrometry (IRMS) is used. IRMS reveals clues that are invaluable to environmental investigations, allowing scientists to trace sample origins and unearth potential sources.

So, where do Isotope Fingerprints come in? How can carbon, nitrogen, sulfur, oxygen and hydrogen isotope fingerprints inform environmental investigations? Carbon isotope fingerprints carry a botanical origin signature, meaning, a signature related to photosynthesis and factory production, and it can be used to identify fossil fuel emissions and biogenic burning, mineralization processes and air pollution sources, for example.

Nitrogen isotope fingerprints carry a signature related to soil processes, soil fertilization and manufacturing processes, which means they can be used to identify fertilizer tracing, industrial and transport emissions and air pollution sources.

Sulfur isotope fingerprints are linked to local soil and geological conditions, as well as proximity to the shoreline. Consequently, it can be useful in the identification of fertilizer tracing, natural weathering for source identification and air pollution source.

Air pollution, also known as haze events, is a growing global issue and is caused by a high concentration of sub-micron particles (PM2.5) in the air in the form of sulfate aerosols and nitrous oxides derived from fossil fuel burning, ozone and volatile organic compounds. PM2.5 particles impact the surface temperature of the earth, thereby affecting weather and climate, and carry serious implications for human cardiovascular and respiratory health. In order to improve air quality, it is important to identify the source of air pollutants (referred to as source apportionment), which can be determined by using the isotope fingerprints of the air pollutants.

In a recent study, weekly PM2.5 samples were simultaneously collected at an urban (Seoul) and rural (Baengnyeong Island) site in Korea from January 2014 through February 2016. The isotopic results implied that isotope species from Baengnyeong were mostly originated from coal combustion during China’s winter heating seasons, whereas in summer, the isotopic patterns observed that were more likely to be from marine. In Seoul, coal combustion related isotopic patterns increased during China’s winter heating period while vehicle-related isotopic patterns dominated whole seasons by default. Read more about air filter analysis using carbon, nitrogen and sulfur isotope fingerprints in this application note.

Additionally, the nitrogen isotope fingerprint increased as the amount of air pollution increased. The increase in nitrogen is principally related to coal combustion and secondarily to vehicle emissions, whilst the increase in sulfur isotope values is indicative of a fossil fuel source and not maritime aerosols or biogenic sulfur sources, correlating with coal-burning during winter heating in northern and north-eastern China.

Polycyclic aromatic hydrocarbons (PAHs) are a persistent pollutant in the air, soils and sediments. Many PAHs are toxic, carcinogenic or mutagenic to organisms and humans, depending upon their structure, placing them among the extensively monitored organic contaminants. PAHs are present in the environment from natural sources including fossil fuels, such as coal, vehicle emissions, from volcanic eruptions and forest fires. In addition, PAHs derive from anthropogenic sources, including by-products of vehicle emissions, burning of fireplace wood and fuel oils, and various industrial processes.

Pyrogenic PAHs are formed by incomplete combustion of organic material, such as during cracking process, combustion of motor fuels or wood in forest fires, while petrogenic PAHs are formed during crude oil maturation, as a by-product of vehicle emissions or oil spills. Although sources of PAHs are generally well-known, investigating whether PAHs originate from oil, wood or coal is important in order to reduce the health risk associated with increased anthropogenically sourced PAHs.

Nitrate pollution is a major concern in many waterways across the world. From a human perspective and regarding our drinking water resources, the regulation of nitrate input into water through the Nitrate Directive (91/976/EEC) and Waste Water Directive (91/271/EEC) is important because excess nitrate levels can cause methemoglobinemia, or “blue baby” disease (read more in this post). Although nitrate levels that affect infants do not pose a direct threat to older children and adults, they do indicate the possible presence of other more serious residential or agricultural contaminants, such as bacteria or pesticides.

Nitrates can originate from multiple sources: excess application of mineral nitrogen fertilizers and animal manure in agriculture, discharges from urban or industrial nitrogen-bearing waste water, septic leachate in unsewered areas, atmospheric deposition or decomposition of soil organic nitrogen. In addition to the existence of multiple potential nitrate sources, nitrate pollution may originate from present as well as from historical land use, which complicates the problem.

Nitrates originating from different sources have unique oxygen and nitrogen isotope fingerprints, allowing them to be clearly differentiated and their source identified. This allows the source to be clearly identified and thus the impact and remediation strategy required to be well informed and implemented. Furthermore, it also allows their individual contribution to total nitrate pollution to be determined, providing us with a great tool for improving water quality on our planet. In the environmental chapter of the Isotope Fingerprints e-learning series an example of nitrate analysis is shown and explained with more details and results. Attend now to get more information.

Follow the adventure of the Isotope Hunter as he investigates the origin and authenticity of samples with isotope fingerprints. By using isotope ratio mass spectrometry (IRMS), the Isotope Hunter gains access to information on geographic region, botanical processes, soil and fertilization processes, and fraudulent practices. Are you an Isotope Hunter? Investigate here.