How to Make Your ICP-OES Analysis More Robust 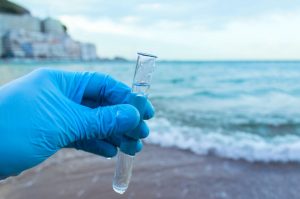 Inductively coupled plasma-optical emission spectrometry (ICP-OES) has been around since the early 1960s, when Stanley Greenfield’s group at the laboratories of Albright and Wilson Ltd, Birmingham, UK, published the first paper describing the technique in 1964.1 Around the same time, the well-known (at least in ICP circles) group of Velmer Fassel at the Ames Laboratory, Iowa State University, was also starting to investigate the use of ICPs for elemental analysis. In the years since its inception, the technique has been applied to everything from routine multi-element analysis of water and soils to analysis of wear metals in engine oil samples. ICP-OES has a (well deserved) reputation for being a fast, reliable and simple-to-use technique for measuring a wide range of elements down to low / mid part per billion (i.e. μg/L) concentrations.  As a result it has become a ubiquitous instrument in all sorts of laboratories across the world, with an installation base now numbering in the tens of thousands. ICP-OES is considered to be a relatively robust technique, but there are some applications that introduce challenges in terms of signal drift and blockage of sample introduction components. In this blog post, I’ll describe some of these challenges and how you can solve them.

How does ICP-OES technology work?

ICP-OES technology, such as the Thermo Scientific™ iCAP™ 7000 Plus Series ICP-OES, works by using a high temperature argon plasma (the ICP) to evaporate, desolvate, atomise (and, in part, ionise) the compounds in a (usually) liquid sample, after aspirating the sample into the plasma via a peristaltic pump, nebulizer and spray chamber. After these processes have occurred, the heat of the plasma then promotes electrons in the outer shells of the atoms (and ions) to higher energy levels. As these excited atoms and ions travel onwards to slightly cooler regions in the plasma, the electrons fall back to their original shells, emitting a range of wavelengths of light (a spectrum) characteristic of the particular element to which the atoms and ions correspond. The emitted light is collected and reflected via a set of mirrors, then passed through a prism and onto a diffraction grating, which resolves the different wavelengths into the picometre range, allowing them to be detected by a photosensitive detector such as a charge coupled device (CCD) or a charge injection device (CID). There are two configurations of ICP-OES instruments, namely radial view and dual axial/radial view. Radial view systems measure light emitted from excited atoms and ions from the side of the plasma and dual view instruments measure light from both the side (radial view) and the top end (axial view) of the plasma. With radial measurement, the light collected is emitted from a relatively small quantity of plasma, making these instruments less sensitive than dual view systems, but more robust in terms of tolerance to the sample matrix in the plasma (less signal suppression in particular) and less affected by spectral interferences. With dual axial/radial systems, an additional set of mirrors allows light emitted along the whole (axial) length of the plasma to be collected as well as the radial emission. Axial detection is typically up to 10x more sensitive than radial detection, depending on the element being measured. With samples that don’t contain much matrix (such as drinking water), the higher axial sensitivity allows key elements such as As, Cd and Pb to be measured down to the low ppb level, while the radial emission is used to measure higher concentration elements such as Na, K and Ca.

What sort of samples can cause problems, what are these problems and how can you solve them?

The samples that cause the biggest problems for ICP-OES are things like saline matrices (e.g. sea water, brine), metal / metal alloy digests, heavy organic materials (e.g. engine lubrication oils) and volatile organic solvents. The problems they cause include nebulizer blockage, torch devitrification / cracking, injector degradation / blocking and extinguishing the plasma. With dual axial/radial view systems, coating of the radial view window by deposition of the sample matrix can also occur, leading to an increasing reduction in light transmitted through the window as the analysis proceeds. Fortunately, there are a number of solutions available to deal with these problems.

Nebulizers are required in ICP-OES to turn liquid samples, which plasmas can’t tolerate a lot of, into a fine aerosol, which they can handle. The standard nebulizer usually provided with ICP-OES systems is a small capillary, glass concentric device. This nebulizer is eminently suitable for routine, low sample matrix applications such as drinking or river water analysis or measurement of digested pharmaceuticals, but is prone to blockage when samples containing higher matrix content are pumped into it. To avoid blockage, alternative nebulizers include wider capillary, glass concentric devices such as the SeaSpray, parallel path nebulizers such as those produced by Burgener Research and the V-groove nebulizer. Your ICP-OES vendor will be able to advise you on which of these is best for your application.

The main purpose of the spray chamber in ICP-OES is to remove larger droplets from the aerosol produced by the nebulizer, while letting smaller droplets pass into the plasma. This is necessary in order to achieve efficient conversion of the sample in the plasma into atoms and ions, and to maintain a stable emission signal. The spray chamber also helps to reduce the quantity of sample reaching the plasma, which is essential when analyzing volatile organic samples as too much solvent vapor pushes the plasma out of the induction coil that sustains it, thereby extinguishing it. Conventional spray chambers are often of the cyclonic type, which are quite efficient at transporting sample to the plasma and therefore less effective with volatile organic samples. Baffled cyclonic spray chambers incorporate an inner tube which restricts the quantity of sample passing to the plasma, allowing it to tolerate volatile samples.

The torch injector is the tube that passes down the center of the torch, allowing the sample aerosol to be ‘injected’ into the base of the plasma. Standard injector tubes are made from quartz and have internal diameters of typically 2 mm, which is fine for aqueous samples, but problematic for volatile organic solvents. Together with the baffled spray chamber described above, switching to a smaller, 1 mm i.d. torch injector further improves the ability of the plasma to tolerate more volatile samples. For high salt containing samples, torch injectors made of alumina are more robust than quartz, and if you need to analyze samples containing hydrofluoric acid, sapphire or platinum injectors are also often available. If you do need to analyze hydrofluoric acid (HF), great care must be taken to wear protective equipment including safety glasses, lab coat and gloves and to have calcium gluconate HF antidote gel on hand in the event you come into contact with the samples.

The plasma torch is the component that directs and constrains the argon flows required to generate and maintain a stable plasma. Standard torches are made from quartz, which is fine for straightforward applications based on samples that contain low matrix levels and are not corrosive to quartz. The trouble starts when the samples contain high amounts of salts such as sodium chloride or lithium metaborate, high levels of hydrofluoric acid or organic solvents.  Sodium and lithium salts are able to get ingrained into the body of quartz torches, causing the torch to devitrify and eventually crumble away. Hydrofluoric acid dissolves quartz, so erodes quartz torches, and some organic solvents can make the torch overheat, causing it to crack. The solution is to use a ceramic torch, such as the D-Torch. The D-Torch is made from Sialon, which is an extremely robust material based on silicon nitride. It is ideal for corrosive, aggressive and organic samples such as those described above, and provides a much longer lifetime than quartz torches can achieve with these types of samples.

A sheath gas adaptor is a device inserted between the spray chamber and the torch which prevents crystallization of high salt samples in the injector tube, by providing a supplementary argon flow which tangentially envelopes the sample aerosol, preventing it contacting the injector tube. With the sheath gas adaptor, little or no sample deposition on the injector occurs and so extended washing between samples to prevent injector blockage is not required. Since the use of a sheath gas enables higher matrix samples to be analyzed, less sample dilution is required leading to improved method detection limits.

The radial view window is a protective device on dual view instruments that prevents sample matrix from entering the instrument’s optical system. Standard radial view windows are made of quartz and block the entrance to the radial view optics while allowing light to pass through. With high matrix samples, material from the sample gradually deposits on the surface of the window as the analysis proceeds, leading to a continual decline in light transmission through the window and a corresponding fall in the radial emission signals. The solution is to use a purged radial view window. This window has two holes in the base which allows the purge gas used to flush out the instrument optics to also flow through the window. The purged radial view window also has a tapered tip which directs the purge flow through the top of the window, thereby stopping sample matrix from entering and depositing on the base of the window. This design provides significantly enhanced long term radial signal stability and also improves sensitivity, particularly in the UV wavelength range where the optimum emission lines of key elements such as As, Cd, Hg, Pb, P and S lie.

To learn more about ICP-OES and related instrument solutions from Thermo Scientific, visit our trace elemental analysis page and to find out more about how the technique works, visit our ICP-OES learning page.