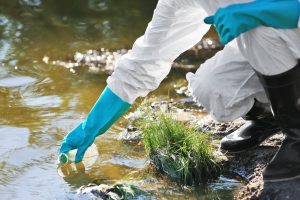 Since the days of the Industrial Revolution (from 1760 to around 1840), anthropogenic input of elements into the environment has been a significant issue.  The rapid growth of factories, chemical works, and other industrial operations led to a sharp increase of pollutants entering the atmosphere, rivers, and lakes, as well as wide distribution of these contaminants in the urban and suburban areas surrounding these manufacturing sites.

Growing awareness throughout the 1900s of the health problems and environmental damage caused by pollution drove global governments to develop legislation to push the industry to clean up its activities. Laws such as the UK Clean Air Act of 1956 (which was a response to London’s Great Smog of 1952, caused by a combination of industrial and domestic burning of coal) and the US National Environmental Policy Act of 1970 paved the way for improved regulation and monitoring of environmental emissions, together with enforcement, fines, and prosecution for industries found to be non-compliant.

Central to the development of environmental contaminant limits and corresponding on-going monitoring programs have been organisations such as the US Environmental Protection Agency, the UK Environment Agency, the European Commission and the Chinese Ministry of Ecology and Environment. Comparable institutions exist in all the nations of the world and most of them operate regulatory frameworks that are generally similar to the US EPA.

The US EPA has developed a range of methods for a wide variety of pollutants, including trace elements. The main elemental analysis methods are those based on ICP-OES and ICP-MS, namely:

US EPA Method 200.7: Determination of Metals and Trace Elements in Water and Wastes by Inductively Coupled Plasma – Atomic Emission Spectrometry

US EPA Method 200.8: Determination of Trace Elements in Waters and Wastes by Inductively Coupled Plasma-Mass Spectrometry

The European equivalent to the US EPA methods are based on guidance provided by the European Water Framework Directive (EU WFD), in particular the EU WFD Directive 2008/105/EC on environmental quality standards in the field of water policy. In the UK, the UK Water Industry Chemicals Investigations Program (CIP) is a currently running program based on implementing EU WFD guidance for a range of inorganic and organic priority substances, as well as emerging contaminants.

Why do trace element contaminants need to be measured?

Metals such as cadmium, mercury and lead and semi-metals, such as arsenic, are highly toxic.  Cadmium, mercury and lead in their elemental form are known to be nephro- and neurotoxins (i.e. toxic to the kidney and brain / nervous system respectively). Mercury in the form of organo-mercury compounds such as dimethylmercury is extremely toxic, capable, even at low concentrations, of causing fatal damage to the brain and nervous system when ingested or absorbed through the skin (as documented in the tragic accidental death of the American academic, Karen Wetterhahn, in 1997). Some organic arsenic compounds, formed by biological action on elemental arsenic in the environment, also show significant toxicity.  In addition, elements such as chromium (particularly as Cr(VI)), nickel and tin (in the form of organotin species) are also a concern. Chromium (VI) and nickel are known carcinogens (the latter particularly so when absorbed via the lungs) and organotin species (historically used in anti-fouling paints for ships) are endocrine disruptors that cause developmental disorders in marine organisms, as well as being toxic to brain, liver and kidney tissue.

What techniques are available for trace element analysis in environmental samples?

To learn more about the capabilities of trace element analysis instruments from Thermo Fisher Scientific for environmental analysis, head to our Metals Analysis Information learning center.

Take a look at our trace elemental analysis instrumentation pages to explore our range of AA, ICP-OES, and ICP-MS instruments.