Rising to the Challenge: Detecting One of the Deadliest Substances

Could there be a substance more potent than morphine?

Opioid epidemic is a phrase used routinely as of late. Psychoactive drugs are used medicinally for surgical anesthesia, palliative care and chronic pain management. Opioids can have beneficial effects in patients to relieve pain; nevertheless, between 1999 and 2017,  more than 702,000 deaths have been caused by an opioid overdose. This is, in fact, the leading cause of injury-related deaths in the United States.

Opioids, such as morphine, are routinely prescribed, but many analogues are emerging such as fentanyl, fentanyl analogues, and novel compounds such as U-47700. The most dangerous analogue is carfentanil. All of these psychoactive drugs bind to a receptor in the brain, but carfentanil binds to the same receptor faster and more tightly, thus enhancing its potency. To put it into perspective, carfentanil is potent enough to tranquilize animals, such as an adult African elephant.

When misuse is suspected and first responders respond to a scene, they must use caution and refrain from touching the powdery white substance because it can easily be absorbed through the skin or inhaled if airborne. A fatal overdose of morphine is 2,000 mg, where the same fatal dose for carfentanil is around 2 ug, which is about as much as a few grains of sand. This synthetic analogue is 10,000 times more potent than morphine. That is like comparing a mosquito bite to being stung by a box jellyfish!

Detection of ultra-low level of substances…can’t fathom it?

To accurately determine fentanyl and its analogue concentrations, researchers will obtain samples in blood or other biological matrices from drug monitoring research or from fatal overdoses resulting from misuse.  Due to the extreme potency of fentanyl analogues, very low levels are detected in biological matrices (sub ng/mL).  In donor samples, the ability to detect morphine would be as if trying to find a beach ball in a swimming pool. In comparison, detecting analogues of fentanyl would be like trying to find a popcorn kernel in the same swimming pool. 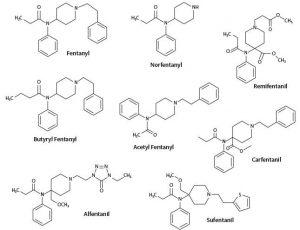 Initially, analytical measurements were completed using high pressure liquid chromatography with ultraviolet detection (HPLC-UV) and gas chromatography with mass spectrometry detection (GC-MS), however, there was not enough sensitivity to detect these analytes. There are some immunoassay kits available on the market, however, as seen in the figure to the right, the chemical structure of these analogues is very similar, leading to cross-reactivity. These analytical approaches might cause laboratories to miss potential drug substances or provide only partial or inaccurate confirmation of drug analytes due to lack of instrument sensitivity and specificity.

LC/MS/MS: The answer to staying ahead of this “man-made” drug problem

Liquid chromatography mass spectrometry (LC-MS) allows for the sensitivity and selectivity needed for researchers to determine what psychoactive substance is in the donor sample. LC-MS analysis can be performed in less than 10 minutes, and low limits of detection can be reached for targeted drug analytes. Targeted quantitation panels of specific analogues can be monitored on triple quadrupole systems, such as the Thermo Scientific™ TSQ Quantis™ triple-stage quadrupole mass spectrometer, using selected reaction monitoring (SRM) where precursor and product ions of the analytes are monitored. An example of this experiment is found in this poster with forty different fentanyl analytes.

To keep up with new synthetic drugs being made on the illicit drug market and the possibility of looking for other drugs that were co-administered, screening analysis must be performed. In order to confirm which drugs are present in a sample, analyte information is stored in compound databases or libraries that include: retention time, exact mass, isotopes, and fragments for all the known drugs.  The capability of being able to screen an extensive analyte list is important because drug dealers use highly potent carfentanil in combination with heroin/morphine to obtain an intended effect at a more desirable cost.

Screening of compounds can be performed with a Thermo Scientific™ Orbitrap™ instrument, such as a Thermo Scientific™ Q Exactive Focus™ mass spectrometer. Using a scan feature, data-dependent analysis (dd-MS), which acquires a full scan and then subjects the top N ions to fragmentation, provides precursor and product analyte information. To determine which analytes were found in the patient samples, the retrospective dd-MS data would then be screened versus a database in automated software, such as Thermo Scientific™ TraceFinder™, software. Unknown metabolites of drugs of abuse and structurally related designer drugs can be detected using Themo Scientific™ Compound Discoverer™ software, through spectral libraries or a database, such as mzCloud™. An example of this screening analysis can be found in this paper.

With these two powerful mass spectrometry platforms, you can not only quantitate down to low levels or popcorn kernels, but you can also screen and confirm a wide range of analytes that are known and yet to be discovered.

Check back for new exciting data on the Cerillant opioid standard!

For forensic use only.

Find the Truth and Learn More 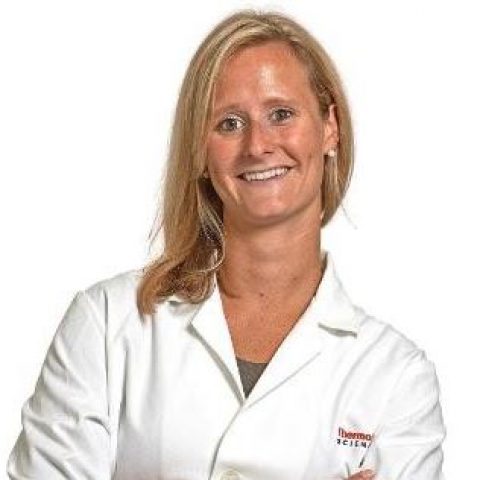