Why are two analytical columns better than one for pesticides analysis? 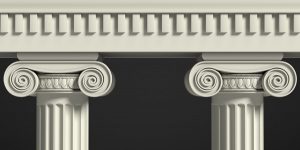 Liquid chromatography-triple quadrupole mass spectrometer (LC-MS/MS) systems started to become more widely used for the analysis of pesticide residues around the year 2000. Availability of this advanced technology-enabled 30-40 LC-amenable pesticides to be analysed in one multi-residue method.  As I know from personal experience this was a substantial improvement on the use of LC- coupled to single quadrupole mass spectrometer, UV, or fluorescence detectors. During the last 20 years, the development of Ultra-High-Performance Liquid chromatography systems in tandem with advancements in mass spectrometry, especially increased acquisition rates and increased sensitivity of triple quadrupole systems, have facilitated the year-on-year trend to increase the number of compounds included in targeted multiclass multi-residue methods. Today, it is possible to analyse 500+ compounds in a single analysis as is the case with the Thermo Scientific™ Pesticides Explorer workflow. As the number of analytes increase, which are the inevitable analytical compromises to be made, and which new innovations will enable further improvements in the analysis of pesticide residues now and in the future?

Currently, the productivity of a pesticide residue laboratory is, to some degree, limited by the chromatographic run time. In a typical multi-residue LC-MS/MS method the run time is a compromise between the number of analytes, the acceptable number of coelutions, as well as the desired peak width and minimum dwell time of the MS detector required to achieve acceptable data quality. A very fast chromatographic run producing very narrow peaks can have a negative impact on sensitivity, selectivity and precision of the measurement. Thus, very fast or even ballistic gradients run with short columns packed with state-of-the-art sub-2 µm particles are not always optimal approaches to improve laboratory productivity.

Dual-Channel Chromatography for Multi-Residue Pesticides Analysis: A New Application of an Established Technology

An effective solution to minimise the number of compromises is to use a novel dual-channel chromatographic column system in place of the conventional single-channel system. The consists of two UHPLC pumps and a single chassis dual autosampler, and independent flow-paths capable of operating two columns in parallel, simultaneously.  When coupled with a mass spectrometer the complete system should provide increased productivity in routine pesticides residues analysis. The technology is already well established in clinical analysis where sample throughput is often increased by 100%, so why not apply this approach to pesticide residues analysis? The simple addition of a data window to the UHPLC method along with proprietary software logic allows the samples in a sequence to run in a staggered, or overlapping, parallel fashion. The flow from each column is regulated by a selector valve and bypass valve, which will divert all flow to waste except during the data (acquisition) windows when the mass spectrometer is in-line. Samples are injected alternately on column 1 and column 2, with the start and end of chromatographic analysis in each column synchronised to minimize the idle time of the mass spectrometer. The data window in the chromatographic method maximizes the utilization of the mass spectrometer by focusing only on the elution times where peaks of interests elute. Early and the late portions of the run from one column, including column re-equilibration, are discarded while the effluent from the other column is being analysed as shown in the following schematic.

An Independent Assessment of the Dual Column Approach for Pesticides Analysis

Łukasz Rajski, a senior chemist at the European Reference Laboratory, University of Almeria, Spain, performed an evaluation of dual-column chromatography using 273 pesticide analytes, several different matrices and a pair of  Accucore™ C18 HPLC Columns (either 100 mm or 150 mm in length) in parallel. Lukasz also evaluated the specific benefits obtained using the Dual-channel approach coupled to a Thermo Scientific™ TSQ Altis™ Triple Quadrupole Mass Spectrometer and a Thermo Scientific™ Q Exactive™ Focus hybrid quadrupole-Orbitrap MS system. Depending on the configuration of columns and mass spectrometer used, the transfer of the method from a single channel to the dual-channel system provided:

If you are interested in more information on the technology, the comprehensive results obtained and the benefits of different column configurations when migrating from a single channel system to a dual system, then you are invited to watch a LCGC webinar presented by Łukasz Rajski. The webinar will be available as a live webcast on June 10th and on-demand thereafter.

Lukasz commented the “transition from a single channel system to a dual-channel chromatography system is very easy, in part due to the simplicity of the Aria MX control software.” The flexibility and reliability of the technology should enable pesticide residues laboratories to increase productivity and/or improve the quality of their data, especially in contract testing laboratories conducting routine pesticide analysis.

You may also be interested to watch this animated whiteboard video which demonstrates the benefits of different multi-channel workflow configurations.