Pressure fluctuations or detector baseline drift may be reoccurring problems faced by an LC operator. In such a case, the first inclination may be to blame the LC system, mainly pump and detector, because they seem to be responsible for a reliable system pressure operation and sample detection.

These are the three most common scenarios:

Have you ever experienced the above or similar scenarios? Try checking your U/HPLC solvents and sample preparation procedures.

Most solvents need to be degassed, so U/HPLC systems typically include a solvent degassing system. However, even if the degassing system works properly, some air bubbles might stick in solvent lines or U/HPLC system fluidics. Flushing and purging all solvent lines and fluidics is the first step that should be done if unstable system pressure and/or detector baselines are observed.

Impurities or contaminants in solvents always have a high impact on the sensitivity of a system (running with these solvents). Imagine how your dish washer would run with very hard water. What result would you expect? Even with a large amount of dishwasher salt and rinsing agent being used, dishes, glasses and cutlery might still look dirty. Even if they look okay now, how long do dish washer mechanics and fluidics work reliably under these conditions?

With a highly sensitive analytical system like a U/HPLC, pressure ripple or increase, detector baseline noise or drift as well as ghost peaks and spikes may result from non-adequate solvent quality. Solvent impurities are especially troublesome in gradient elution mode. The higher the level of impurities and contamination in the solvents being used, the higher the pump pressure fluctuation and increase over time which leads to baseline noise and drift.

If impurities or contaminants are UV-active, baseline noise and drift is further enhanced and ghost peaks and spikes may be observed. The solvent grade must fit the U/HPLC system.

Never use HPLC grade solvents with an UHPLC system. Would you fuel a racing car with diesel?

Buffer salts, ion pair reagents, and base and acid modifiers must also have a quality that fulfills system requirements. This is not only about the purity and grade, it is also about expiry date. Several additives alter over time, especially once the bottle or package has been opened. Some substances come with an expiry date shown on their certificate. However, if no expiry date is shown, this does not automatically mean that the substance does not alter. It does.

Have you ever experienced a substance color change, visible streaks in the bottle or a pH not achieved although the correct amount of buffer salt was added to water? Well, this was clearly an expired substance.

Aqueous buffer liquids especially promote growth of bacteria or algae. Hence, only the volume of buffer liquid that will be used within a workweek should be prepared. In a case where too much buffer liquid has been prepared, it can be used for up to three weeks maximum, but be sure to add 0.01% azide salt or 10 to 20% organic solvent to it. In each case, vacuum filtration removes particles that could produce a noisy baseline or cause clogging of check and switching valves or columns. My recommendations are 0.3 – 0.4 µm filters for HPLC or 0.1 – 0.2 µm filters for UHPLC. Buffer salts are also prone to precipitate in high organic content solvent mixtures (>80%).  Please find more information in this article.

Water is the most common source of contamination in reversed phase LC. It is very common to use high purity distilled or deionized (DI) water and, especially with MS-detection, even ultrapure (UP) water. To make it clear: DI water grade never equals UP water grade.

Organic particles and gases are entirely removed with UP water. DI water typically still contains both. Also, purification system performances differ greatly from each other. Some lower quality purification systems even introduce organic contaminants or particles into the water. If its maintenance is done insufficiently, impurities in water result even with the best-in-town water purification system.

Bottled LC water comes in different grades. It is very important to choose the one that fits the application requirements. The higher the grade, the more expensive it is but fewer residues are present. When long-wavelength UV (or VIS), refractive index or conductivity detection is applied, UP water it is often seen to be unnecessarily expensive as DI water may be good enough to provide the same detector performance. However, UHPLC system performance and durability of fluidics might be affected. A comparison between extra-costs for the upgrade of DI to UP water and frequently reoccurring costs, for example, a UHPLC pump head repair including exchange of piston and seals might tell another story. Do not forget the downtime of the UHPLC system in that calculation.

When was the last time you saw ghosts?

UV-active organic impurities in water can cause detector baseline issues with LC gradient elution mode with short-wavelength UV detection. These impurities may be detected down to the picogramm per milliliter range. Depending on their nature, if they are solid particles, polymers or not, they might “just” contaminate the system but not harm the fluidics.

Typically, such organic impurities show a low elution capacity in water. Hence, they accumulate at the column inlet under high aqueous conditions and are then released at higher organic content mobile phase composition during the gradient formation. The results are ghost peaks or spikes and an increasing drift in the baseline.

Sure, ghost peaks also occur with poor mobile phase degassing, column bleed, injection carryover, injection of air, differences in dissolved air between the sample and mobile phase, systematic sample contamination, and mobile phase component interaction with the column. However, most ghost peaks are caused by using the wrong quality of water. In classical amino-acid LC analysis, it is also better to use freshly opened bottled water. If the bottle was opened weeks ago and/or the water had contact with air for a certain period of time, it might become contaminated with ammonia based gaseous substances coming from normal air. During the high-sensitivity post-column derivatization of amino groups with o-phthalaldehyde or ninhydrin, amines or ammonia based contamination of solvents cause ghost peaks and other detector baseline disturbances.

Next to water and additives, impurities may also originate from organic solvents. Impurities can already be present in commercial supplies of bottled solvents or unintentionally introduced in the laboratory. Glassware that had been cleaned in a dishwasher may not be free of particles or UV-active impurities. Especially organic solvents like methanol or acetonitrile dissolve organic impurities and can become contaminated. Plastic pipettes might contain UV-active softening agents which easily dissolve in organic solvents. The solvent filtering device might be contaminated or not cleaned properly, so impurities might be introduced. The list of root causes for unintentionally introduced impurities is endless. 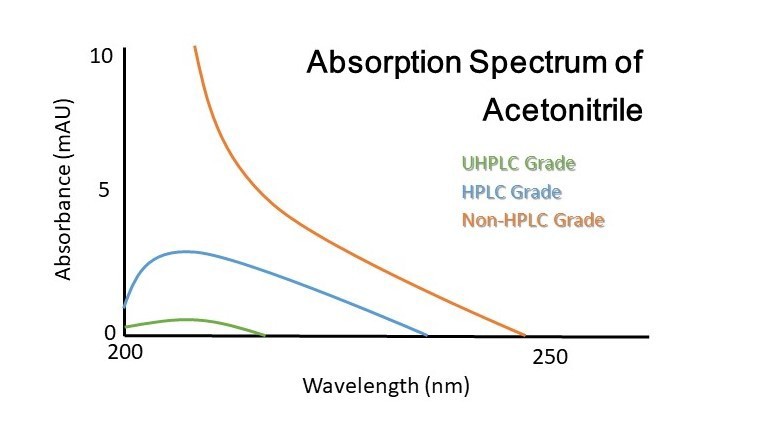 For acetonitrile, tremendous different absorption spectra are known with regard to solvent grade (see picture). Especially at shorter wavelengths, low grade acetonitrile has high absorbance as it also contains UV light absorbing impurities. When such an acetonitrile type is used for gradient HPLC-UV, high baseline noise and drift, as well as ghost peaks, are the typical results. HPLC-UV grade acetonitrile is best suited for high sensitivity HPLC analysis at short UV wavelengths, with UHPLC-UV it should even be an LC-MS grade acetonitrile.  Please find more information in this article by Raymond Wong.

All topics discussed above also apply to sample preparation. Solvent and additive grade or purity and quality, possible precipitation of additives during mixing as well as purification steps like filtering, must be controlled. Even if just and only 1 µl of a dirty sample is injected to a UHPLC system in particular, contaminants and/or particles are introduced that may even lead to clogging of the injection valve, column or other system fluidics. In each case, symptoms like pump pressure and/or detector baseline problems appear. Traces of such contaminants and/or particles remain in the system fluidics and/or the column, at least for a long period of time.

A very good indicator that a dirty sample was injected to an HPLC or UHPLC system and led to pump pressure and/or detector baseline problems is that the problems (slowly) disappear with blank runs, injections from certified standards or samples being known not to be dirty.

In many cases, injections from different samples (hence, vials) are performed in a sequence and if problems mainly occur with injections from specific sample vials, then the dirty sample of this vial is the root cause.

Problems with Method Transformation from HPLC to UHPLC

If an application or method is transferred from an HPLC to UHPLC system, all facts described above must be taken into account. In case solvent and sample quality and grade are not adequately adjusted to UHPLC system needs, then it is similar to fueling a Ferrari with diesel: Engine damage or total loss. 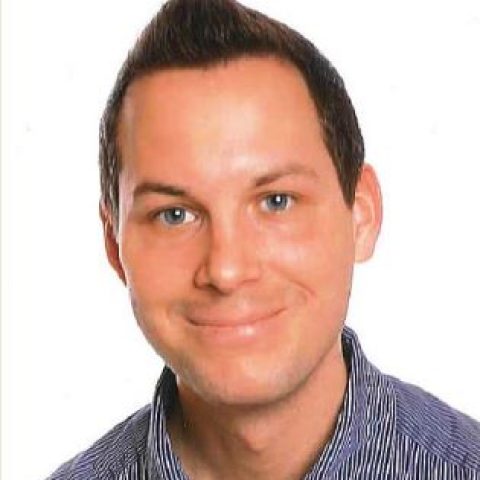